For Rob ’92 and Leigh Rudicel, Wabash is about family—and not just because three generations of Rudicels have attended the College.

Families show up for each other—in good times and bad. Families realize each other’s potential. And families support each other. 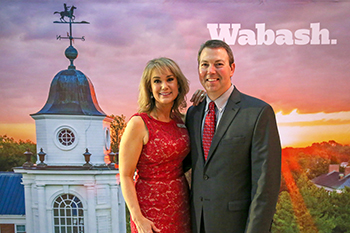 After watching their children experience the kind of support that Wabash provides, the couple established The Rudicel Family Scholarship for Wabash students from Indiana who have demonstrated financial need, as part of the Giant Steps Campaign.

“We believe in Wabash,” Leigh said. “We have been directly impacted by all of the amazing things the College does for its students. And if you’re going to give your money to something, it should be something you believe in.”

Rob and Leigh were high school sweethearts in Yorktown, Indiana, who both fell in love with Wabash while he was looking at colleges. Even though Rob had come to campus a few times with his father, Max Rudicel ’66—a Homecoming game here, a Monon Bell Game there—he didn’t know much about the College itself.

What Rob did know was that his father was a great physician, and that’s what he wanted to be, as well.

“I knew I could get where I wanted to be by going to Wabash,” said Rob, who is now a pediatrician in Fishers, Indiana, and has been named a top doctor by Indianapolis Monthly.

Leigh teaches English as a New Language to intermediate school students in the Hamilton Southeastern district. Together, she and Rob have two children: Alex ’19 and Austin ’20.

From the first semester of Alex’s freshman year, Rob and Leigh began seeing Wabash from a brand-new perspective: as parents.

Like many students, Alex and Austin went through difficult times while they were on campus.

“And every time, everyone at Wabash was concerned about them too,” Leigh said.

“There was one time that President Feller (then Dean of the College) reached out to us and said, ‘Don’t worry. We’ll take care of your boy,’” Rob recalled. “They’ve done that kind of good for our kids, it’s not just because they’re our kids. It’s not because they’re ‘legacies.’ It’s because they’re Wabash men.”

It is Wabash, so there were plenty of good times, too. When Austin was studying abroad in Australia, Rhetoric Professors Jeff and Sara Drury reached out to him and offered to take him to dinner.

“They barely knew him—they just knew he was there! That’s a Wabash thing,” Rob said. 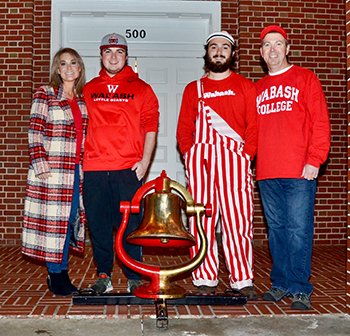 Alex and Austin both lived in the Phi Delt house—as did Rob when he was a student. But Leigh wasn’t just a mom of Phi Delts—she was a mom for the Phi Delts.

“Being only an hour away from campus,” Leigh said, “I could help these other moms who weren’t so close. If the situation was reversed and I couldn’t give my child the help he needed, I would hope someone else would offer. I’ve taken so many treats to students. I’ve taken clothes home and sewn them. And I love doing that; that’s fulfilling to me.”

There were even times when their sons were not on campus that Rob and Leigh were.

“It’s the people,” Rob said. “Whether it’s saying hi to Jon Pactor ’71 at a basketball game or tailgating before a football game, it’s just so nice to be around Wabash people.”

The Rudicels also served on many parent panels during Admissions events as part of the Parent Advisory Committee.

“When we first started getting involved, my thinking was probably, This will be good for my kids. But it wasn’t long before we just wanted to do good things for Wabash.”

Leigh feels so strongly about Wabash and its mission that when she and Rob were asked about participating in the Giant Steps Campaign, she was the first to jump at the opportunity.

“We’ve always given to different causes, but I knew that this scholarship would have the most impact,” Leigh said. “I don’t know what they do, but Wabash has a way of making its students better.”

“To have a scholarship that gives other students that opportunity seemed like a really good decision,” Rob said. “And hopefully the recipients are able to go on to have their own family experience at Wabash.”