Cathy Long likes to tell the story of how her late husband Skip and his father would get together and serenade their family with renditions of “Old Wabash.” In fact, she says, “I have a video of Skip and his father singing the Wabash fight song to our son as a baby and then to our daughter after she was born.”

Now Cathy is honoring both men with a scholarship in the name they shared: The Robert H. Long Family Endowed Scholarship. Cathy’s gift comes as a part of Wabash’s Giant Steps campaign, which seeks to raise $225 million to secure the College’s future. 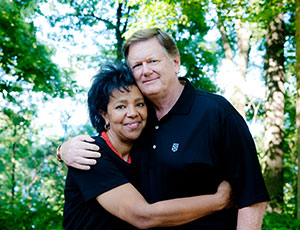 Robert H. Long Sr. studied Economics and graduated from Wabash in 1939; his son and Cathy’s husband, Robert H. “Skip” Long Jr., graduated in 1971 after majoring in political science and speech. Skip went on to a long and successful career as an advertising executive, and in 2013 he and Cathy retired to Callawassie Island—a golf mecca in South Carolina.

Two years later he was killed in a car accident, and Cathy says she was deeply touched by the outpouring of support from the Wabash family. “Classmates called to share their condolences, and many attended the service I had in Chicago,” she says. “The cards I received were just heartwarming. The people he met there are people who were in his life for his whole life, and they continue to reach out to me.”

There really was never any doubt where Skip would go to college. He followed his father to Wabash and brought his academic and athletic prowess to campus. He was a crafty left-handed pitcher on the baseball team, a deft announcer of basketball games, a Phi Gamma Delta fraternity brother, a Phi Beta Kappa Honors graduate, and a debater who developed a lifelong friendship with revered debate coach and speech professor “Papa Joe” O’Rourke.

“On one of our first dates I heard all about Wabash,” recalls Cathy, who wed Skip in 1984. “The DePauw game was coming up, and he wanted us to go to campus. When we arrived, I saw his eyes light up; to him it was like going to Disneyland.”

Skip took his creativity and exemplary speaking skills to the Leo Burnett advertising agency, traveling around the world and working on some of the company’s largest accounts—including Marlboro, United Airlines, and McDonald’s. He and the family—Cathy, son Bobby, and daughter Jennifer—lived in Tokyo for six years while he worked internationally. He was in account management throughout his 42 years at Leo Burnett, retiring as president of new ventures.

During his career Skip mentored dozens of Wabash students and grads and attended career days. “He got a lot of calls from Wabash men looking for his support at the ad agency for their children,” Cathy says. “And he would always make time for those kids, bringing them in and setting up interviews for them, always fostering those relationships.”

Skip’s tragic death came as a horrific shock to Cathy and their children. “He went to the dentist that morning and never came home,” Cathy says. “It was very hard, and still is. I was talking to Jennifer about some way to honor her Dad. She was working in a college development office at the time, and she suggested the scholarship.”

Cathy says establishing the scholarship was healing and allowed the family to carry on Skip’s legacy; she let Jennifer do most of the legwork, alongside David Troutman, Wabash’s director of gift planning.

Cathy set up the endowed scholarship with appreciated stock she and Skip accrued over the years. Funding the scholarship in this way enabled her to maximize the monetary benefit to Wabash and avoid the capital-gain tax she would have incurred if she had sold the stock itself. “The Robert H. Long Family Endowed Scholarship was very easy to set up,” Cathy says, “and will further Skip’s passion for helping students and Wabash. Now we know that other Wabash men will get a good start.”

“I have never seen anything like the Wabash band of brothers,” Cathy says. “There’s something about the connections made at this college. It’s magic. Wabash is in our hearts because it was in his heart.”

For more information on the Giant Steps campaign, including the College’s progress to date and ways to give, visit the campaign website.