Drs. Elizabeth Bowman and Philip Coons ’67 are old friends of the students at Wabash College—even if the students don’t necessarily know how much they owe to the couple.

That beautiful spot in the Fuller Arboretum where students like to frequent for a moment of peace among nature? That’s Petty’s Patch, and it exists because of Phil and Liz.

That public service summer internship a classmate or fraternity brother experienced that changed the course of their careers and lives? That exists because of Phil and his brother Stephen M. Coons ’63. 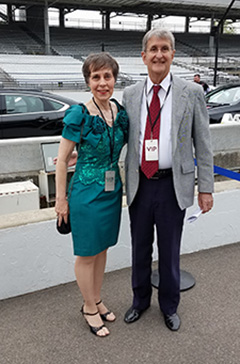 Now Phil and Liz are taking another Giant Step for Wabash by endowing a fund that will provide biology internships, which will send Wabash students off campus for paid internships in the field and in faraway laboratories. Last summer, this fund supported its first intern Cameron Martin ’21. Beginning in 2021, it will support two interns each year.

This gift is the next piece of the giving puzzle that Liz and Phil have spent their lifetimes together building. “We’ve both been given so much in life,” Liz says. “It only seems fair to share.”

When Liz was diagnosed with brain cancer in 2002—and was not expected to live—Phil decided to do something to honor both her and another important person in his life. Liz is an avid horticulturalist and Master Gardener, and the famed Wabash Professor of Biology Dr. Robert Petty was Phil’s mentor at Wabash. Petty was a renaissance man, a poet-botanist who was as comfortable wading into Sugar Creek to examine the life found there as he was turning lines of poetry. Establishing a stunning spot in the Arboretum—Petty’s Patch—just made sense to Phil, who could honor his life partner and life mentor in one philanthropic gesture.

In the late 1990s, Phil and Steve established the Harold M. ’32 and Margaret R. Coons Public Service Internships in memory of their parents. That provides funds for students who pursue unpaid internships and makes opportunities possible that otherwise wouldn’t have been financially viable. Every year Steve, Phil, and Liz travel to campus for a dinner with the students who have interned at places like NPR, Amnesty International, or Congress, to name a few recent examples. In total, the fund honoring Phil’s and Steve’s parents has created 59 public service internships for Wabash students.

But it was the rich and fulfilling conversations at those dinners—and the launching of the Giant Steps Campaign, which aims to expand the experiences available to students—that sparked the motivation for their most recent gift.

“I’ve just so much enjoyed hearing the stories these young men tell about their internships,” Phil says. “I think it’s important for them to have off-campus experiences, either an internship or an immersive experience. That’s what this campaign is all about. And those are the experiences that can change their lives; set them on a new trajectory for success.”

Liz is quick to concur. “Every time we’ve given to any group that’s worthy, including Wabash, we’ve gotten so much more back,” she says. “It’s really gratifying to go to the dinner with the public service interns and listen to what they did. We hear them say, ‘Without this money, I could not have afforded to live in Washington D.C.’ We see the impact these internships have had on them.”

Phil and Liz are both retired psychiatrists who graduated from the IU School of Medicine. They’ve authored many scholarly articles individually and jointly, and even wrote a book together on the history of psychiatry in Indiana.  Phil is a professor emeritus in psychiatry at IUPUI. Liz retired from the faculty of the IU Department of Neurology.

For her part, Liz has always had some questions about her 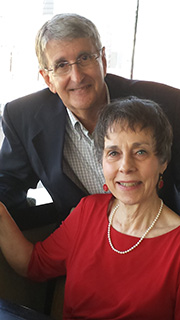 husband’s alma mater: “How can a giant also be little? I’ve never understood it.” But she’s very rarely questioned that the man whose life was shaped by his experiences at Wabash is truly a gentleman.

Now Liz is doing her part to assist Phil in helping the College become even stronger as Wabash approaches its bicentennial. She wants Wabash men to graduate “excited instead of uncertain” about their career paths, and hopes these internships give Wabash students a broader experience in the world beyond their classrooms and living units.

Phil couldn’t agree more. “Experiences like those that the public service interns receive are formative. They last, and you can’t get them anywhere else.”